For an upper-middle class household in Latin America, residing in an apartment tower  with good access to jobs, services and amenities seems like a natural choice. In cities with high levels of congestion, low decentralization of jobs, highly concentrated amenities, and few transport alternatives, vertical neighborhoods appear as the demand for access of the more affluent grows.  In fact, many well-to-do neighborhoods in Latin American cities are also vertical neighborhoods.

In recent work on income segregation in Brazilian cities, published in the OECD report Divided Cities: Understanding Intra-Urban Inequalities, I explore whether verticalization bears any relationship with the high observed levels of segregation of the affluent. Preliminary visual evidence for some cities, including Rio de Janeiro, clearly points to a correlation between the percentage of affluent people and the percentage of people residing in apartment towers across neighborhoods. 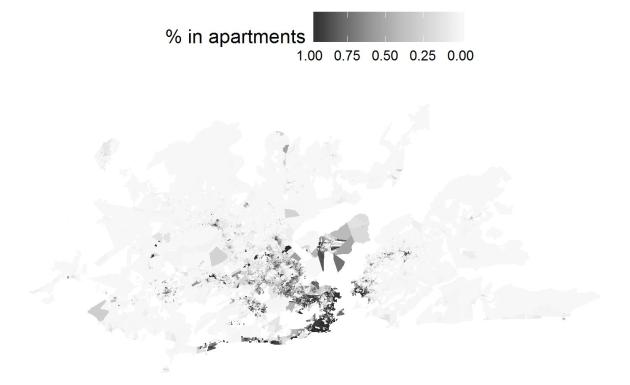 To test the relationship between concentration in vertical neighborhoods and income segregation, I construct an index of exposure to dwellers in other type of buildings and a measure of segregation of affluence based on an ordinal entropy index. I find that vertical neighborhoods are indeed part of the explanation behind the segregation of the affluent in Brazilian cities, even after controlling for city size, income inequality and other city-level variables. Whether land use regulations have encouraged the surge of vertical neighborhoods concentrating high income households, and how can they be used to ensure affordable housing in central areas in Latin American cities are two interesting questions for future research.

My co-author Robin Lovelace has recently made available  a new version of his R package stplanr, which helps processing and visualizing Origin-Destination transport data in R. It integrates the useful dist_google function to get network distances and time using the Google Maps API, which we used in our accessibility to schools in São Paulo paper. Highly recommended!

An excellent post by Rafael Pereira about tools for making interactive nice-looking density lines maps using R and ggplot2. You can also reproduce this famous cover if you are at it!

A working paper co-authored with Miquel Àngel García López entitled “Income Segregation and Urban Spatial Structure: Evidence from Brazil” is now available as part of the CAF Working Paper Series. In this work, we estimate the effect of urban spatial structure on income segregation in using data for 121 Brazilian cities between 2000 and 2010. We show how the effect of local density varies between monocentric and polycentric cities, and between income groups.

This paper is part of a line of research trying to link the distribution of employment within cities with the distribution of the population by income groups, in order to understand the possible causes of residential segregation by level of income in urban areas.

Looking for theoretical guidance in the urban economics literature when analyzing problems of cities with large informality rates can be quite challenging. Most models have been designed for urban realities where there is no informal employment or informal housing, both of which are hard to ignore in cities in emerging and developing countries. The outstanding doctoral thesis of Héctor Mauricio Posada explores innovative ways in which informality can be incorporated into existing theoretical urban models to study questions related to urban expansion, transport provision and migration, among others. The thesis leads to many interesting insights that serve as basis for much needed future theoretical work, and identifies relevant connections that can be translated into empirically testable predictions. 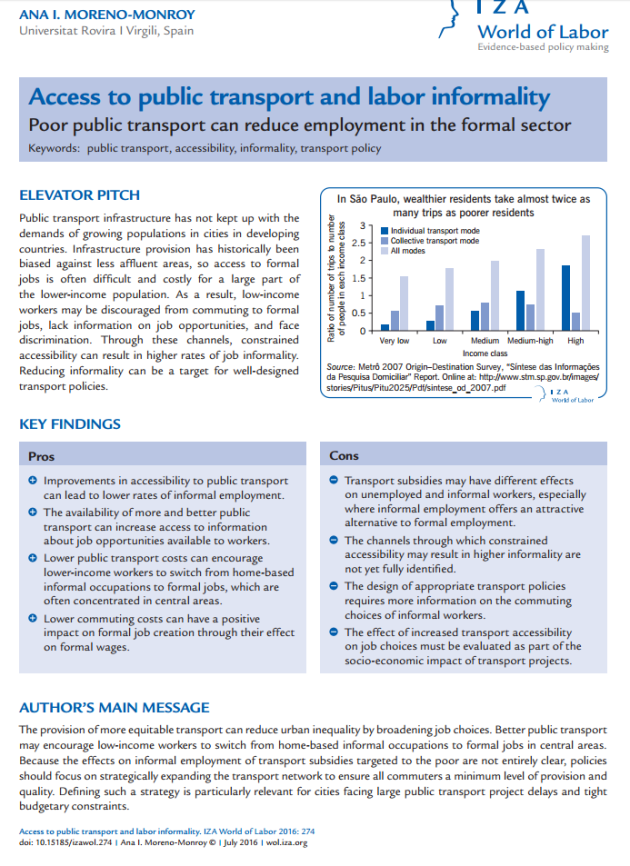 The distribution of people of different income levels within urban areas is anything but random. Residential segregation is a palpable, undeniable reality to any observer of cities. The patterns of segregation are also extremely persistent over time: despite massive demographic changes and migration flows, the spatial arrangement of income groups within cities changes only very slowly. Why is this the case? Surprisingly, there are not many theoretical insights on the long-run drivers of residential segregation, and thus very little guidance about what policies should or should not do about it.

A recent excellent contribution by Rémi Louf takes a step forward in proposing much needed mechanistic insights on the patterns of urban segregation. In his work, he departs from the null case – an unsegregated city – against which observed segregation levels can be compared.  He then proposes a measure of segregation inspired on Marcon and Puech’s M-function of co-location, and a way to let a class structure emerge from the data (in  this way avoiding the need to impose arbitrary income cut-offs).

Among other things, he finds that “neighbourhoods are geographically more coherent as cities get larger, which corresponds in effect to an increased level of segregation as the size of the city increases.” Interestingly, this phenomenon seems to be more important for higher-income households than for other income groups.

In the preliminary findings from my study on income segregation in Brazil, I find strong support for these patterns. The level of segregation increases with income, so that individuals in the highest income category are far more segregated than any other income group, including the poorest. There also seems to be a strong, positive relationship between city size and income segregation levels.  An interesting way forward is to think about the relationship between density and the over-representation of the highest and lowest income categories in urban areas in developing countries. Ultimately, we need to understand how income segregation evolves with economic development.

A recently published paper by Baumer et al (2014) caught my eye today (HT to Bruce Caron).  I wanted to share it here because I thought it was cool and also had a few comments to make about some of the issues the authors raised.

First, a bit about the paper.  Partly in response to all the media attention to the crisis in reproducibility in science (e.g. Nature) Baumer and colleagues made some changes to introductory statistics classes at Duke, Smith, and Amherst.  The primary change was to require the use of R Markdown for all homework.  RStudio was the editor they used and it appears any cutting and pasting of code, figures, etc. was not allowed.  They conducted a survey of the students early in the class and after the class.  The end result was that students preferred using R Markdown over the typical mode of cut and…

The São Paulo Metropolitan Region faces an acute deficit of public transport infrastructure, making commutes long and costly for workers. The difficulty in accessing jobs centers may translate into higher informality rates, since workers may be discouraged to take formal jobs, miss on information about job opportunities, or even be discriminated against according to  their place of residence. 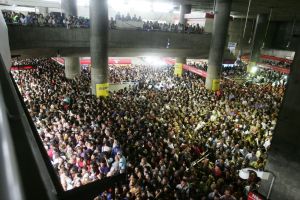 In a new working paper co-authored with Frederico R. Ramos, we estimate the impact of public transport expansions on local informality rates. An important part of the explanation for the large deficit in transport infrastructure are chronic project delays. We use this information in our methodological approach to compare areas that received new transport infrastructure with areas where new train/metro stations or bus corridors were planned, but eventually not built.

Example of areas with (left) and without (right) a bus corridor. Source: Google Earth

After controlling for endogenous selection, we find this impact to be significant: informality rates decreased on average 16% faster in areas that received new transport infrastructure, compared to areas that faced project delays.